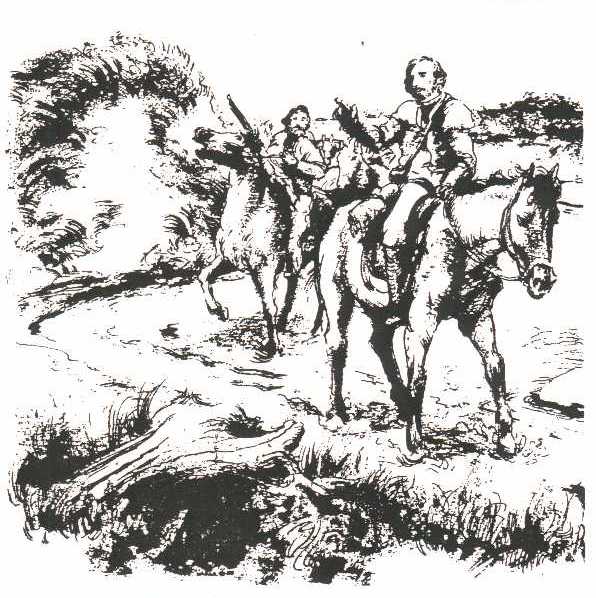 INTRODUCTION
The "Jedediah Smith Millenium Exploration" is an upcoming public awareness event initiated by the National Coast Trail Association.  It will not only strive to highlight the historic significance of Jedediah Smith, but also remember and honor Native Americans and their rich cultural heritage, and appreciate the unique scenic beauty of the south coast.   The plan calls for their executive director, Al LePage, as "Jed Smith" and dressed as a mountain man, to hike up the southern Oregon coast and literally "rendezvous with history" by essentially traveling the same approximate route on the exact historic dates, and for the same distances and in the same areas as the Jedediah Smith's expedition did in 1828!  It will provide the kind of direct field experience that can potentially serve as the basis for serious research and scholarship about Jedediah Smith especially during the 1828 expedition up the Pacific coast, and his encounters with Native Americans.  Indeed, it has the potential of literally becoming a historic event in its own right for at least three reasons.  First, it would be the first time retracing the 1828 expedition has apparently ever been attempted along this section of the west coast during the same historic dates as the original expedition.   Second, as expected, having the event itself has lead to the designation of the Jedediah Smith Trail as a Community Millennium Trail.  Third, it represents a conscious and coordinated effort to offer residents and visitors alike a chance to learn about and connect with their land, their history, and culture using the Jedediah Smith Trail as the common thread to do so.  The series of public events given in conjunction with LePage's hike will provide a once-in-a-lifetime opportunity having the potential to foster a unique and deeper understanding not only of Jedediah Smith and his significance in history, but also of Native American perspectives and, thus, a more accurate knowledge of history.
Let's Travel Back In Time . . .
SAINT LOUIS, 1828


This is where the story of Jedediah Smith as a mountain man begins.

Enterprising Young Men
Thus, states Dale Morgan in his book Jedediah Smith and the Opening of the West.

This ad began the career of Jedediah Smith and eventually led him to an exploration of the West overshadowed only by Lewis & Clark! Actual journal entries made by Smith about this time in his life later noted . . .

Dale Morgan also notes in his book that . . . This suggests Smith envisioned himself not only becoming a hunter but also exploring the west all the way to the Pacific itself! Over the next 10 years of his life he not only realized this vision, but far exceeded it.

In late summer 1826 Smith and a party of men set out on the South West Expedition by riding into the valley of the Great Salt Lake. They eventually reached the California coast, and became the first white men to arrive there by traveling across the inland deserts! Smith needed to make a rendezvous near the present-day Idaho-Utah border, and in 1827 left California to become the first white man to cross the High Sierra to get there. On July 13, 1827 Smith and his party of men headed for California, and after arriving spent months being detained by the Spanish authorities to eventually leave on December 30, 1827 to continue the business of trapping. At this point Morgan notes . . .

Smith and his men struggled on and by May 19th, 1828 they finally had their first view of the ocean. It was not until June 8th, though, that they finally reached the Pacific, coming out at the mouth of Wilson Creek, near present-day Requa, California. However, the struggle continued as they moved up the coast over steep ridges and through timber and brush until reaching present-day Crescent City, California. On June 20th he crossed the mouth of a major river, the now Smith River of California, and entered Oregon on June 23rd, 1828. Smith and his party traveled up the coast and became the first white men to do so below the Rogue River, near present-day Gold Beach, Oregon. They reached the now Smith River of Oregon by July 13th; the next morning while still encamped there Indians attacked and killed most all his men, putting an end to the 1828 expedition. Smith, however, (and three of his men) survived, and he went on to explore other areas of the west during his brief lifetime.
This is where the Smith story ends, and where our story begins.


Enterprising, passion, vision, resourceful, explorer, first-time, perserverance, pioneering -- these are some of the words that describe Jedediah Smith -- and, we believe they also describe the National Coast Trail Association and our upcoming Jedediah Smith Millennium Exploration! We passionately pursue our mission of "Keeping The Coast For Everyone" through participation and education for trails, public access, and coastal preservation. We area a non-profit with limited resources and need to be resourceful and perservering to carry out this mission. Therefore, we envision an enterprising and pioneering first-time event to promote "A Rendezvous With History" along the southern Oregon coast -- The Jedediah Smith Millennium Exploration!  Indeed, there will be many opportunities for the public to meet with "Jed Smith" along the way, and "Rendezvous With History!"


This is where our story ends, and perhaps where your story begins.